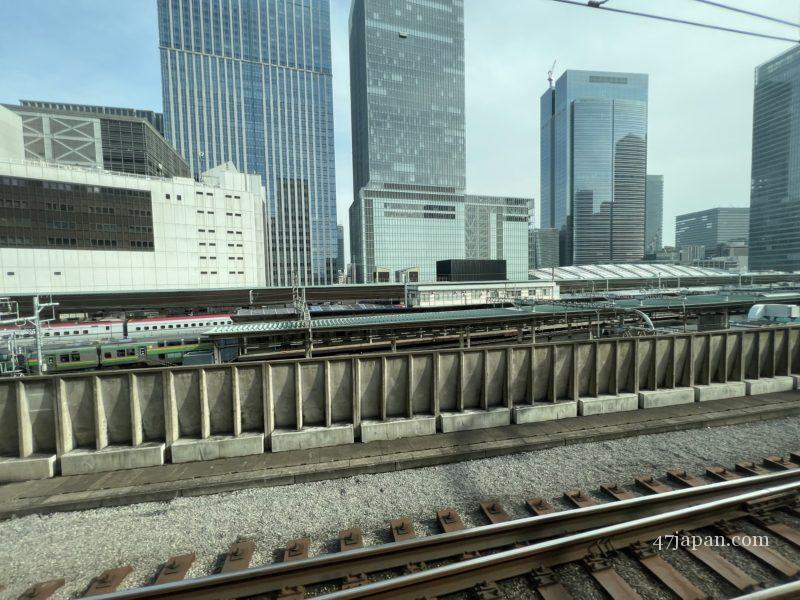 Tokyo Station and its surroundings

Tokyo Station is located on the east side of the Imperial Palace and is a terminal for each JR (Japan Railway) line. Tokyo Station is the starting station of the Shinkansen, and the Shinkansen connects various parts of Japan with the capital. In addition, there are many routes connecting the suburbs of Tokyo, and a large number of businessmen commute to the office district around Tokyo Station every day. There are several unique underground malls in Tokyo Station, making it the largest station in Tokyo and also a place to shop, eat and drink.

On the east side of Tokyo Station, Yaesu’s sober office district spreads out, and it was an old office district unrelated to most tourists, except for the long-distance bus stop. However, in recent years, the Shangri-La Hotel has opened, and soon the Bulgari Hotel will open.

Looking further east, there is Ginza, one of Japan’s leading shopping streets, and Nihonbashi, which was the center of Tokyo in the old days. Chuo-dori, which connects Ginza and Nihonbashi, is the main road that represents Tokyo, and is lined with hotels and department stores.

The area around Tokyo Station is the political and economic center of modern Japan, and may not be suitable for those who seek Japanese traditions. However, the Imperial Palace and Nihonbashi have a long-standing remnant, and it is also attractive that they have good access to various parts of Japan.

Towns and attractions around Tokyo Station

Tokyo Station, which is located in the center of Japan, is a huge terminal where Shinkansen bullet trains arrive and depart to various parts of Japan. In addition to the Yamanote Line, commuter trains to the suburbs of Tokyo are constantly arriving and departing. The characteristic of Tokyo Station is the number of underground malls rather than the number of lines. Inside the ticket gates of the station, there are malls centered on food such as Ecute and Gran Sta, and outside the ticket gates of the station, in addition to the huge Yaesu underground shopping mall, there are unique underground shopping malls such as Tokyo Ramen Street and Tokyo Character Street. be. If you plan to travel from Tokyo Station, it’s interesting to stop by. You may find Japanese souvenirs.

Ginza is one of the world’s leading shopping streets, with many Japanese department stores such as Mitsukoshi and Matsuya, as well as many European brands. Whether you should go to Ginza may depend on which country or region you are from. It may not be of interest to people from Europe, but it’s worth seeing the endless rows of shops in an orderly cityscape.

A long time ago, roads extended from Edo (former name of Tokyo) to various parts of Japan starting from this Nihonbashi. It can be said that it was exactly the center of Japan. Since the expressway was built on the bridge at the time of the first Tokyo Olympics in a hurry, it does not seem to be the center of Japan now, but plans are currently underway to underground the expressway. Nihonbashi is famous for having the main store of Mitsukoshi, a Japanese department store. Please note that the station name in this area is “Mitsukoshimae Station”, and “Nihonbashi Station” is closer to Tokyo Station and a little far from Nihonbashi.

It’s difficult to find an unsafe place in Tokyo, but especially the area around Tokyo Station is a clean and safe city. But basically, if you have something to keep in mind when living in your own country or traveling abroad, it’s a good idea to do it. We Japanese often talk to foreign tourists to help them, and it is surprising that foreigners refuse coldly. Perhaps foreign tourists suspect that they are trying to sell something, perhaps because of their experience traveling in other countries. Excessive self-defense sometimes deprives you of the joy of traveling, but at the same time, no one else protects you. There are pickpockets in Japan, and there are people who aim for women. If you have any concerns, I recommend you to go to the police box in front of the station immediately.

What To Bring To Japan